The Brockville Country Club's Summer Series of Dinner/Show/Dances held in the Granite Hall each of the past 4 summers has been a great success. AND the 2016 version of the Summer Series is sure to please.
Four dinner/show/dances are now booked for this 2016 season. Two of the shows are encore presentations. The Summer Series will open with Feddy Vette and The Flames, the very popular 50's and 60's Rock & Roll band from Belleville. The series will close with The British Invasion from Toronto who put on a great performance last year and are sure to be a super closing act this year.
In between, we have two new shows for BCC's Summer Series. With patrons asking for a little Country Music, we are bringing in The Sons of Perry from Owen Sound. The evening will start a little later and have platters of food delivered to each table after the first set, rather than a full served meal beforehand.
The fourth show will feature The Toronto All-Star Big Band. This travelling band will feature some 26 talented youth (ages from 16 to 22) playing and singing many of the big band era music. This will be an exciting show and like all our shows, great to dance to. 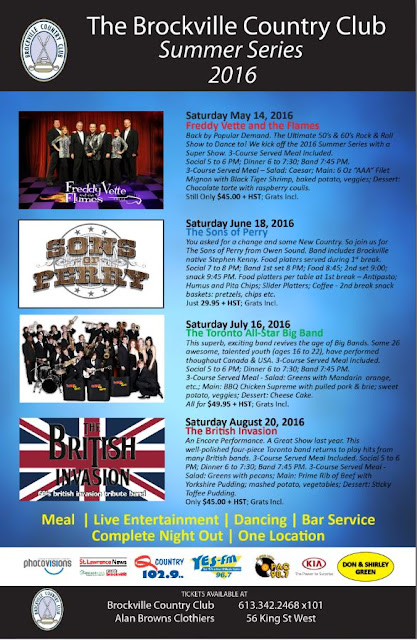 Support your Brockville Country Club and come partake of one or all of BCC's Summer Series of Dinner/Show/Dances this summer. Call the BCC office TODAY and book your seats. A BCC Member 4-show discount pack available. A great Meal; Live Entertainment; Dancing; Bar Service; a Complete Night Out ... all at One Location Under One Roof. Come join the fun this season!
Posted by BCC at 6:46 AM