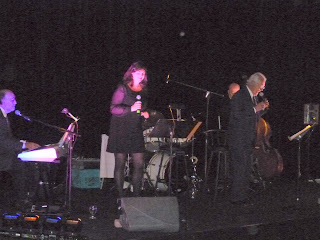 Saturday, June 22, 2013 was the second of BCC's Summer Series of Dinner & Shows and featured Cliff Edwards, Chantel Thompson, Paul Harding, Bob Arlidge and Doug Gravelle  with their "Steppin Out" - The Best of Irving Berlin. Cliff was the lead singer of "The Bells", a very popular Canadian band which reached great heights across Canada and the US.
Saturday's Show was very entertaining with some 215 BCC members and guests attending; many who spent the majority of the evening on the dance floor. The entertainment was preceded by another great, served, 3-course meal by our BCC staff. Thanks to Jason, Emily and their staffs for a super meal.
The next Dinner & Show is Saturday, July 20, 2013 and will feature Freddy Vette and the Flames. This is a high-energy Rock & Roll show which will sell out ... so get your tickets early at the BCC office; Katz Deli or Allan Browns.

John Monk Gets a Hole-In-One on BCC's 9th 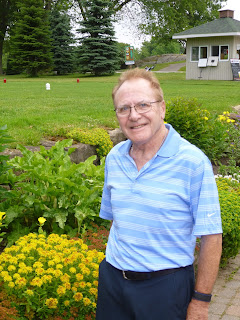 Saturday, June 22, 2013: Saturday was a great day for John Monk (pictured at right) as he potted his second-ever HOLE-IN-ONE. John was playing with Dave Dargie and Heinz Koch. The hole-in-one came on "Little Misery" (our hole #9) using a seven iron from the yellow tees. This is John's second hole-in-one. The first came some years ago at Summerlea Golf & Country Club, Montreal. CONGRATULATIONS John in your BCC hole-in-one achievement.
Posted by BCC at 8:09 AM No comments:

The Brockville Country Club attended Elizabethtown-Kitley's Business Fair held at the Spring ValleyHall Saturday, June 8, 2013. The BCC has lots to talk about: Golf, Curling, Wedding Receptions, Banquets, Dinner/Shows/Dances in the Granite Hall, and all were of interest to attendees. 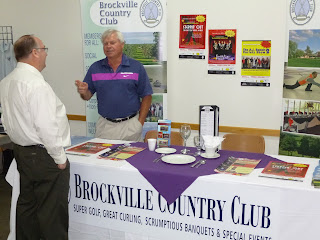 Bob Larocque (shown behind the BCC table-top booth) and Jack Kenny (behind the camera) manned the booth. With prospects of expanding the E-K Business Fair next year and the Spring Valley Hall becoming a library, Elizabethtown-Kitley may look to hold the event in our BCC Granite Hall in 2014. Participation can bring rewards!
Posted by BCC at 7:25 PM No comments: