Gold at the Brockville Country Club 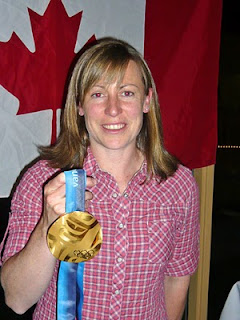 Wednesday evening, April 14, 2010 at the Brockville Country Club, was special. Have you seen an Olympic Gold Metal? Have you touched one? Have you had the chance to talk to an Olympian? To listen to an Olympian tell what it takes to be a gold metal winner ... not once, but three times!
Well members of the Brockville Ad & Sales Club had such an opportunity. For the guest speaker at the Ad & Sales was Jayna Hefford, gold metalist on the Canada Women's Hockey Team.
Jayna has played in over 200 international games for Team Canada winning numerous gold and silver medals. She scored the winning goal against Team USA in Salt Lake City. And was the assistant captain for Team Canada as they won gold in Vancouver at the Winter Olympics.
Jayna's talk was most interesting and highlighted the commitment and dedication needed to reach such lofty heights. Thanks to the Ad & Sales Club for bringing Jayna to Brockville. It was a special night at the Brockville Country Club.
Posted by BCC at 7:39 PM No comments: 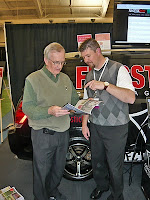 With the golf season opening, that means your first 2010 issue of Flagstick Magazine is at the Brockville Country Club. Jack Kenny recently met with the Owner/Publisher of Flagstick Magazine at the Ottawa Golf Show to go over the Brockville Country Club's promotional plans for 2010. The magazine reaches over 150 golf clubs in Eastern Ontario and Western Quebec, and through the magazine, the BCC extends a warm welcome to other club members to come play the BCC this year. We are sure they will enjoy the experience. And check out the Flagstick Magazine for all the latest golf news and golf gear.
Posted by BCC at 6:06 PM No comments:

Golf Course at the BCC OPEN

WE ARE OPEN!
The golf course at the Brockville Country Club opened for play today, April 7th. Certainly one of the earliest openings ever! The course is in great shape. It has been cut a couple of times and all the greens are amazingly good .... they are like mid-May greens.
First year Membership Specials still on til April 16, 2010. Green fee players welcome at reduced spring rate ...... and should try our new "9 & Breakfast" and "9 & Dine" weekend packages. Call 613 342-3023 for tee times.
Posted by BCC at 12:45 PM No comments: 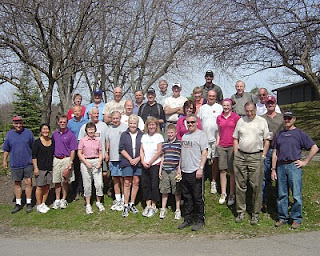 Saturday, April 3rd saw a hearty group of BCC volunteers spend the morning cleaning up the golf course. The group picture above has only about 2/3 of all members who attended. Lawrence and Jack Alexander had the volunteers assigned to teams, with each team cleaning up three holes. Leaves and branches were picked up from the tee areas, fairways and greens. After the morning work, a light lunch was provided by the BCC. Great job Gang! The course wintered very well! Greens, tees and fairways have now been cut and the course opens the Wednesday, April 7, 2010.