Sunday, September 29, 2013 saw 52 ladies participate in the Brockville Country Club's "Ladies Closing". The weather was idea - sunny and warm - unlike the opening in May. A four lady Ryder Cup format was used with the team of Vivian Wright, Maureen Darby, Diane Visser and Carmen Santarossa winning the top team prizes. The remaining prizes of wine and flowers were given out by drawing names. 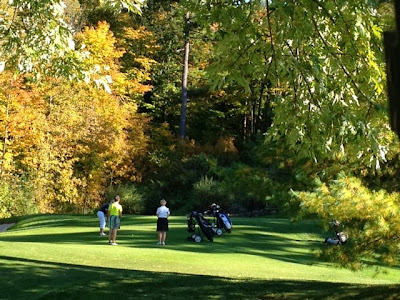 The ladies finished in good time and had a social time in the golf lounge before enjoying a delicious dinner of salad; choice of chicken, steak or fish and a strawberry cheesecake dessert. Congratulations to Sandi Stewart who organized the Ladies Closing and did a suburb job. Still lots of golf left, though Ladies, so keep those clubs handy!!
Posted by BCC at 5:29 PM No comments:

Wildlife and Golfers Quite Congenial at the BCC

During the BCC Men's Closing Golf Event, our family of deer were seen grazing just below the green on #6. They seemed quite unperturbed as we walked by. 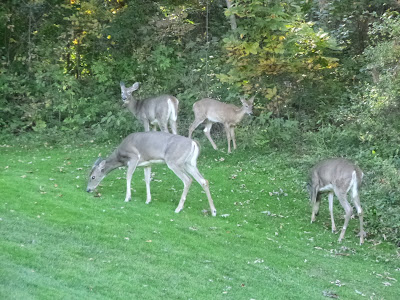 Also seen was one of our resident Blue Herons at the pond on #10 stalking dinner. And the other day a gaggle of turkeys with 14 little ones, getting bigger every day, were spotted on #16. It is great to see the significant number of wildlife supported by the BCC's golf course.
Posted by BCC at 8:08 AM No comments:

The Brockville Country Club Men's Closing Golf Tournament was held Saturday, September 28, 2013 on a simply gorgeous day with 80 members registered. Two-man teams were established and the event played with a Ryder Cup flavour. The first 6 holes played from the whites as a Scramble; the next 6 from the Reds as Best Ball and the last six as Alternate Shot from the Yellow Tees. 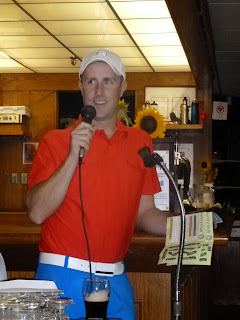 Many thanks to Kent Swirsky (pictured) and Jonathan O'Reilly for organizing a great day, including the weather. After golf everyone was treated to a tasty chicken and ribs dinner in the golf lounge. 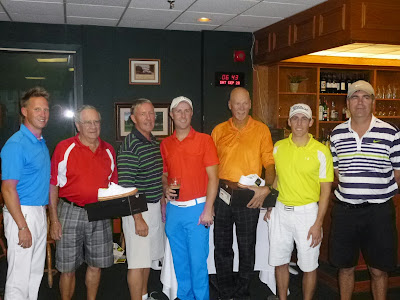 Overall winners (gross) were Dustin Payne and Dale Robertson (67) and net winners were Don Houle and Ray Debuc (embarrassing low). Shown in the picture l to r are BCC Pro Derek MacDonald; Don Houle, organizers Jon O'Reilly and Kent Swirsky, Ray Dubuc, Justin Payne and Dale Roberston.
A Great Day and a Fun Time Had by All .. but where has the season gone!
Posted by BCC at 6:55 AM No comments:

The fall time sees Lawrence and his crew very busy with getting the course ready for the winter and implementing a number of improvements. One improvement you will see while golfing these beautiful fall days is an upgrade to the cart path by #12 green. Many thanks to Bob Castle for again donating the concrete for this improvement. His generosity and support of the Club is much appreciated. 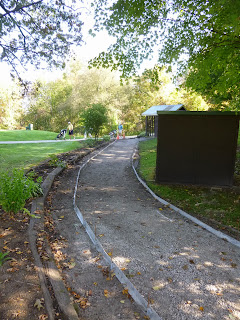 The new concrete path will run from the #12 fairway, past the #12 green and connect into the concrete path that runs from #3 green area and past the #4 tee box areas. This will be a great improvement as the old path in this area was certainly in disrepair. And stay tuned, as I believe there will also be another section of new path completed this fall as well.
Posted by BCC at 10:55 AM No comments:

The Dinner/Show/Dance to be held in the Brockville Country Club's main dining room Saturday, October 5, 2013 is fast approaching. CALL the BCC office or drop in and BOOK SOON!!
It will be a fun evening with entertainment by Spencer W. Evan; a talented pianist, clarinetist, singer and more. Being October, our chef has planned a fine 3-course meal with an Octoberfest theme. During dinner, Spencer will provide some soft music, then at 7:30 PM will put on a show for our listening and dancing pleasure. 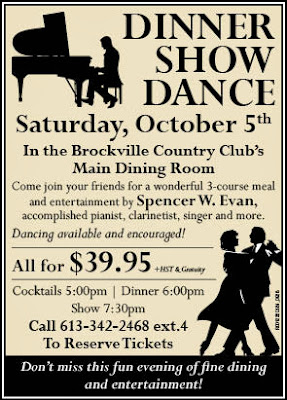 So come join the fun. A Saturday evening of fine dining and entertainment, all for just $39.95 plus tax and grats. Cocktails at 5:00 PM; Dinner at 6:00 PM and Show Time at 7:30 PM. CALL the office TODAY and reserve your seat for what will be an entertaining evening at the Brockville Country Club.
Posted by BCC at 8:39 AM No comments:

The 17th Annual AJM Campbell Shorty Jenkins Curling Classic at the Brockville Country Club was an exciting few days; played September 19-22, 2013. Twenty four (24) men's teams coming from Ontario, Quebec, Alberta, Manitoba, Nova Scotia, Newfoundland, Scotland, Sweden and Minnesota, USA competed. Also twelve (12) ladies teams competed coming from Ontario, Quebec, Scotland, Switzerland and Wisconsin, USA. It was the who's - who of curling; those you watch on TV at major world events, right here in Brockville.
After some great play and some unbelievable shots, Sunday crowned the Brad Jacobs Rink of Sault St. Marie, Ontario, Men's "Shorty" Champions and the Mirjam Ott Rink of Davos, Switzerland, Ladies "Shorty" Champions.
The "quarters" saw Stoughton, Gushue, Edin & Jacobs survive over Howard, George, Martin & Tuck respectively. Then in the Semi's Stoughton and Jacobs got past Gushue and Edin setting up the final with Jacobs winning over Stoughton. For the Ladies, Ott was able to beat Ottawa's Homan for the Ladies Championship.
Gord McCrady Jr., his committee and all the volunteers need to be congratulated and thanked for the tremendous effort in organizing the Shorty year after year. This year had the best field ever and the Shorty spectator crowds were the largest in history. The Brockville staff also need to be congratulated for their marathon effort in meeting the needs from early in the morning to late at night each day. Great job gang. The 17th Annual Shorty Jenkins Classic at the Brockville Country Club was certainly a world class and memorable event.
Posted by BCC at 6:32 AM No comments:

Thirty-six teams are in Brockville and at the Brockville Country Club for the 17th Annual AMJ Campbell Shorty Jenkins Curling Classic running Thursday through Sunday September 19 - 22. It is a really strong field with teams from Sweden, Scotland, Switzerland, the United States as well as the Canadian rinks participating.The greats are all here including Glen Howard, Kevin Martin, Jeff Stoughton, Brad Gushue, Rachel Homan and international stars Eve Muirhead and Niklas Edin  ... and more! 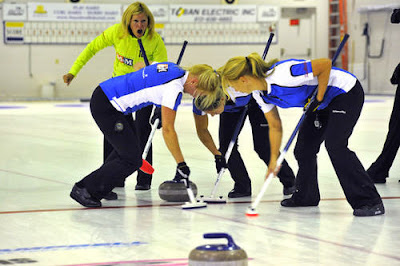 Come on out to the BCC this weekend to see the elite curlers you watch on television. They are all here in little old Brockville. The cost is minimal at $10.00 per day or $25.00 for the weekend. It is a great opportunity to see the stars of curling right here at our Brockville Country Club.
Posted by BCC at 6:49 AM No comments:

The Brockville Country Club hosted the second annual Flagstick BCC Open this past weekend, Saturday & Sunday, September 14 & 15, 2013. A total of 96 players took part, divided evenly over four flights.In the end, Allen McGee of Dunrobin, Ontario scrambled back on the back nine of day two to take the victory and the Stanley Thompson Trophy, winning by 3 strokes with a two day total of 144. 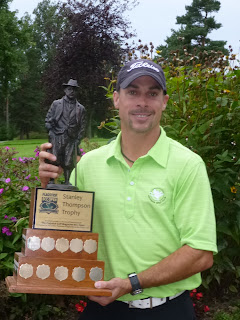 Coming second overall and the "A" Flight winner was Brook Henderson, the Smith Falls 16-year-old, 10th ranked female amateur in the world, who played against the men and from the blue back tees. First round leader Dwight Reinhart came in third with BCC's Adam Folco fourth.
The "B" Flight was won by Sean Flynn (153) while the best of "C" Flight was BCC's Mark Peacock (160). Wade Wright captured "D" Flight with a two round total of 170.
The Flagstick BCC Open at the Brockville Country Club was the third event of the BMG Cup Series. The other two events were played at Smugglers in the spring and at eQuinelle in July. Allen McGee capped off his year by also taking the BMG Cup Series Trophy. The three tournaments were put on by Flagstick Golf Magazine and sponsored by Nike Golf Canada.
Congratulations to Derek, Lawrence. Emily and all the staff at the BCC for ensuring the Flagstick BCC Open was a great success. 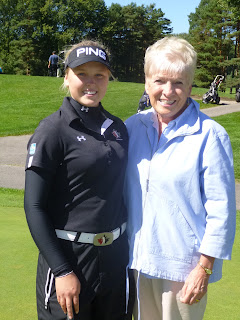 Now how did Bev Johnson get her picture with Brook Hensderson? Brook indicated that she enjoyed playing the BCC and the competition and that she would like to play all three of the BMG Cup Series events next year.
It was a super weekend with many great players present. But with only MeGee shooting a two-day total of par, you might say the BCC Golf Course won. We hope to see you all again next year!
Posted by BCC at 4:28 PM No comments: 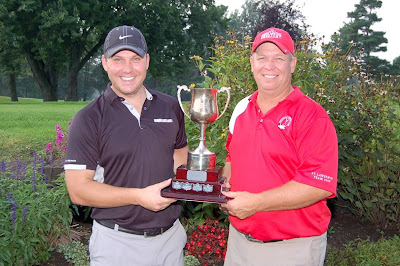 Pictured are Adam and Dale. CONGRATULATIONS Adam, Dale, Michael and Hugh for representing yourselves and the Brockville Country Club so well.
Posted by BCC at 12:41 PM No comments:

The 20th Annual Friends of Palliative Care Golf Tournament and Banquet was hosted by the Brockville Country Club Wednesday, August 28, 2013. And records were set in many areas. Both a morning and afternoon draw were hosted catering to some 288 golfers; a record. For the evening banquet, silent auction and presentations the BCC served a sit-down 3-course meal to 320 participants and guests .. another record. And of course the organizers were able to announce a record total of $255,000 raised through this year's event.

The golf tournament and banquet hosted by the BCC raises close to half the yearly budget for the Brockville and District Hospice Palliative Care Service. It is a big event for a very important local service. Organizers and their many volunteers should be proud of their accomplishments over the past 20 years. And so should the staff and volunteers at the Brockville Country Club. The BCC has been a willing partner in making sure the tournament has been a success over the many years. CONGRATULATIONS staff for a great job in ensuring the Friends of Palliative Care had a great day.
Posted by BCC at 5:17 PM 1 comment: