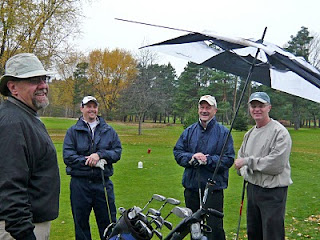 Four of our BCC members; Brian, Steve, Shawn and Bill were seen heading out for a round of golf this past Saturday morning, October 30th. Although a little damp, the temperature has remained quite reasonable. (Brian, you need to add a new umbrella to your Christmas list!). The course will remain open after October 31st, but with temporary greens. Members are welcome to play, as weather permits, but are asked to please stay off the greens as Lawrence has started preparing the greens for winter. Carts will not be available after Sunday; so walking only! Curling may have started, but the hardy can still golf at the BCC during November!!

The Cornwall Curling Club and the Brockville Country Club played back-to-back curling spiels; the first being played last Friday, Oct 22 in Cornwall and the rematch at the BCC this Friday Oct. 29th. The "Friendly" was organized at our end by Pat Alair with six (6) rinks from Cornwall and six (6) rinks from the BCC for a total of 48 participants. Rumour has it that Cornwall took most of the marbles! 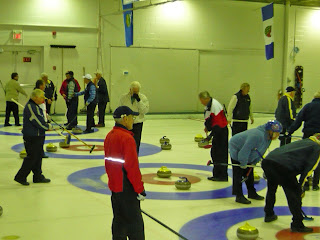 Following the morning play, all participants were treated to a fine lunch in the curling lounge. 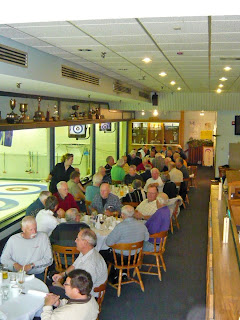 Throughout the curling season our seniors will participate in other "friendlies" at such clubs as Gananoque, Prescott and Smith Falls. Good luck to all our BCC members as you travel and represent the BCC in the various "friendlies".
Posted by BCC at 11:57 AM No comments:

Sunday, October 17, 2010 was Ron Healy Appreciation Day recognizing his many years of service at BCC as he now moves to other challenges. The day started with a scramble at 12:30 PM on a beautiful sunny day. During the afternoon, Ron played with many member groups by flipping from group to group. 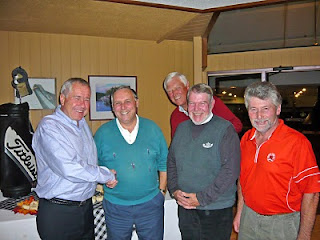 Following golf, golfers were joined by many other members and guests for a great meal presented by Denise and her staff. Well over 125 were present. Although a fun day, there were a few prizes presented. The picture above shows Ron congratulating the overall scramble winners Ken LeBlanc, Bob Frost (at rear), Doug Lovat and Paul Sloan. 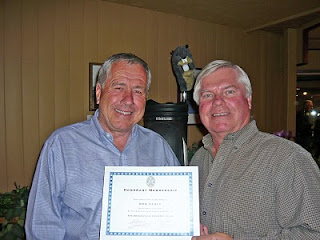 Following dinner and prizes, Kelly Winsor, BCC's accountant told of his getting golf instruction from Ron. Ardis Lindsay then provided a tribute to Ron's many years at the BCC. Bob Larocque, our Club President chaired the evening which culminated with Bob presenting Ron with an Honorary Lifetime BCC Membership, that being followed by a standing ovation. Monday, Ron was off to the Chateau Cartier Resort in Gatineau where he was installed as the CPGA Ottawa Zone President at their trade show, dinner and awards night. (Ron is shown in the picture being presented the Shield from past President Dale Pederson). Congratulations Ron for your many years at the BCC and all the best in your new challenges. And you can bet members will be "looking for a game" next season.
Posted by BCC at 7:07 AM No comments: 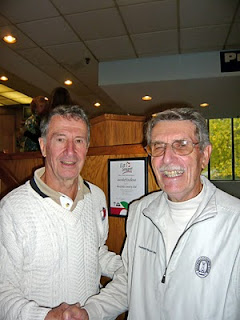 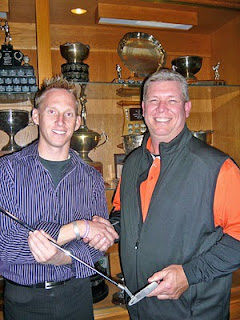 During Tuesday, August 31st, when NIKE representative Michael Doyon was at the BCC showcasing his line of NIKE apparel, all members who filled out a survey-form had a chance to win a NIKE prize. Well we have a winner! None other than our Club Captain, Dale Watts (on right), shown being presented a "top-of-the-line" NIKE "Method" putter by our Derek MacDonald. Congratulations Dale!
The BCC is moving forward and will have a full line of NIKE apparel on display for our 2011 golf season. The goal is also to "freshen up" our whole Pro Shop, so stay tuned for details as enhancements are worked on. 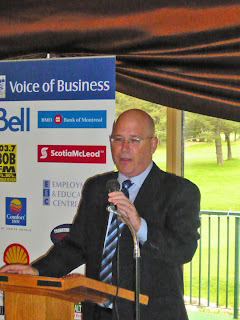 MPP Steve Clark was guest speaker at The Brockville and District Chamber of Commerce breakfast held at the Brockville Country Club Thursday morning. About 100 chamber members heard Steve make a plea for chamber support for a business plan he, Senator Bob Runciman and MP Gord Brown are trying to have commissioned to bring a secure female treatment unit to the Brockville Mental Health Unit. Steve, trying to stay to provincial issues related a lighter moment when speaking to students at Toniata Public school; a "cute little girl" asked "what's your position on the MDC?". Steve also had fun relating to when he ran for mayor with about 14 signs, compared to the current "most talked-about election in the City's history" with an "unprecendented number of candidates" ... and signs!
The setting at the BCC was ideal with a great breakfast served to the chamber members and guests. The BCC would be pleased to look after your needs for such meetings, whether large or small.
Posted by BCC at 6:25 AM No comments:

Some 30 ladies from the Ladies Twilight League celebrated their year at a wonderful dinner at the Brockville Country Club last week. The league is made up of BCC members and "promotional" ladies and is played each Wednesday evening in various fun formats. During the dinner, the convenor baton was passed from Jennifer Baker to the duo of Susan Hildebrand and Roberta Riddell. Congratulations ladies on a well run program and we look forward to a great turnout for your 2011 golf season.
Posted by BCC at 6:39 AM No comments: