A fun St. Partrick's Day Dinner & Show is planned for Saturday, March 15, 2014 to be held in the main dining room of the Brockville Country Club. And, of course, we expect many will be up and dancing as the evening progresses. A wonderful Classic Irish Buffet Dinner is planned by Chef Jason and Emily & her staff will be serving the salad and desert. A. J. Benoit is unable to play the show, so Cliff Edwards has agreed to travel from Gananoque with two of his coharts to entertain. Music by this Trio will have a mix of some Irish Classics, some Country, some Rock & Roll and some Easy Favourites. 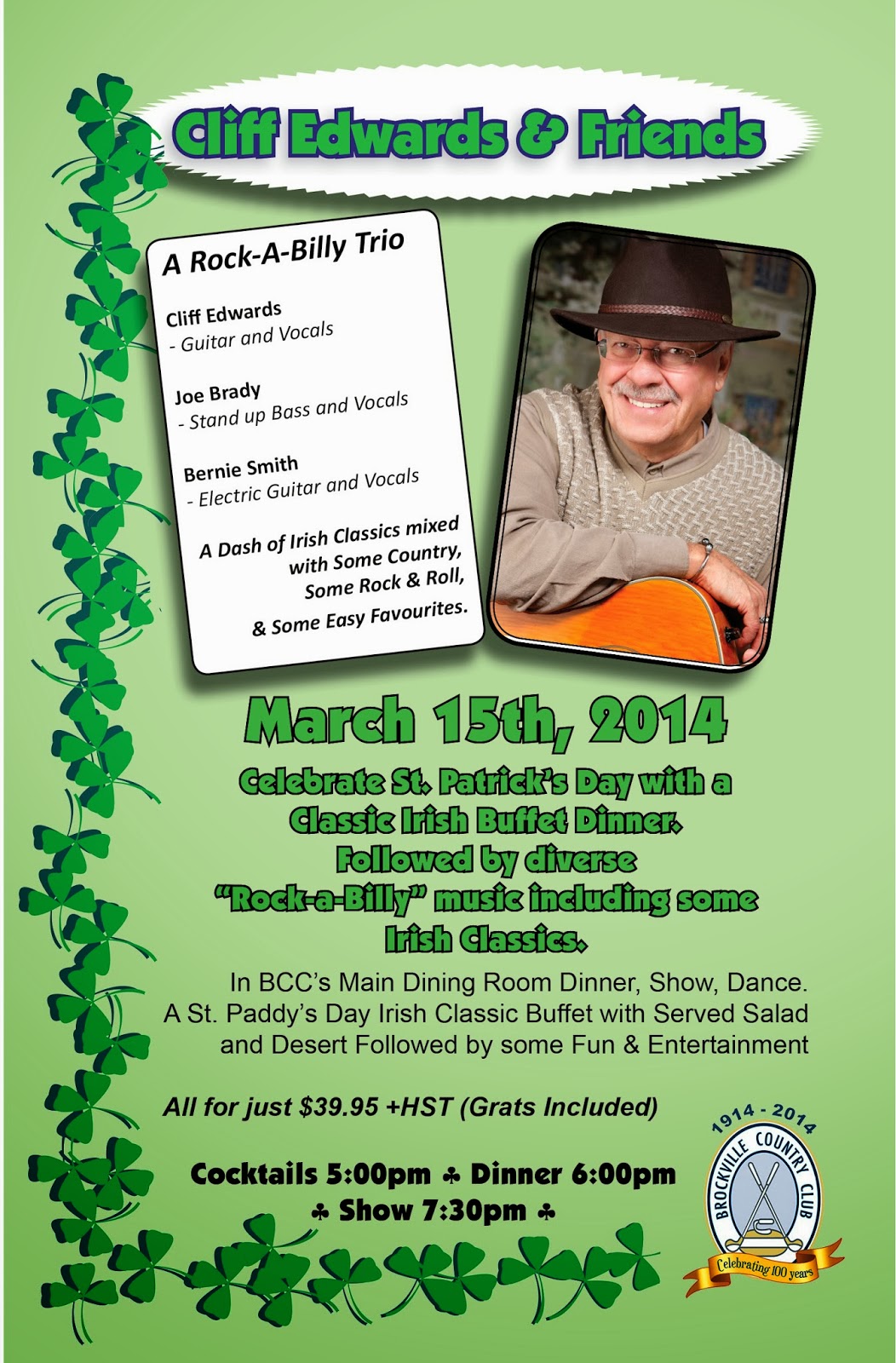 Come join the fun! Call Matt at the BCC office (613 342-2468 Ext 4) and book your tickets. And this would be a great opportunity for any member to use up their "minimum" F&B if not done so already. So get a gang together and come for a very entertaining St. Paddy's Day Dinner, Show & Dance at the Brockville Country Club Saturday, March 15th. Cheers!

Sunday February 23, 2014 - The Brockville Country Club has one of the best locations to host a wedding reception in Brockville and surrounding area. A beautiful setting overlooking the golf course from the dining room and large balcony and a great kitchen that can fine tune a wonderful meal to meet an individual party's needs. And to make the point and solicit additional bookings, Emily and Jack "manned" a booth at the 2014 Bridal Show at Brockville's Memorial Center, Sunday Feb 23rd. 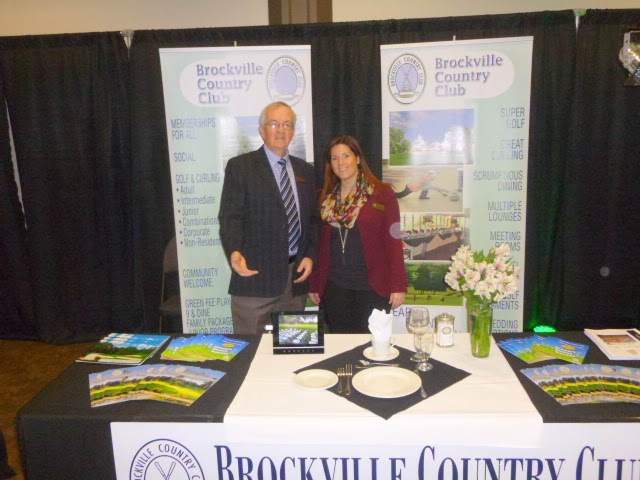 There was good traffic throughout the session and many potential wedding parties; some looking for a 2014 venue and others planning early for 2015. It was a good day which hopefully will bring additional wedding parties to the Brockville Country Club.
Posted by BCC at 7:09 AM No comments:

Saturday, February 22, 2014 - Well they called it a Golf Show! With just over a week notice that the Brockville Mall would host a "Golf Show" it wasn't much time to prepare or get the word out in the community. In the end, four golf courses participated Saturday and Sunday, Feb 22-23 at the Brockville Mall. Those being the Brockville Country Club. eQuinelle, Upper Canada and Prescott. Derek and Jack manned the booth which covered all aspects of the BCC: Our great golf course; Golf memberships, Pro Shop; Training; Curling; Food and Beverage; Entertainment etc. 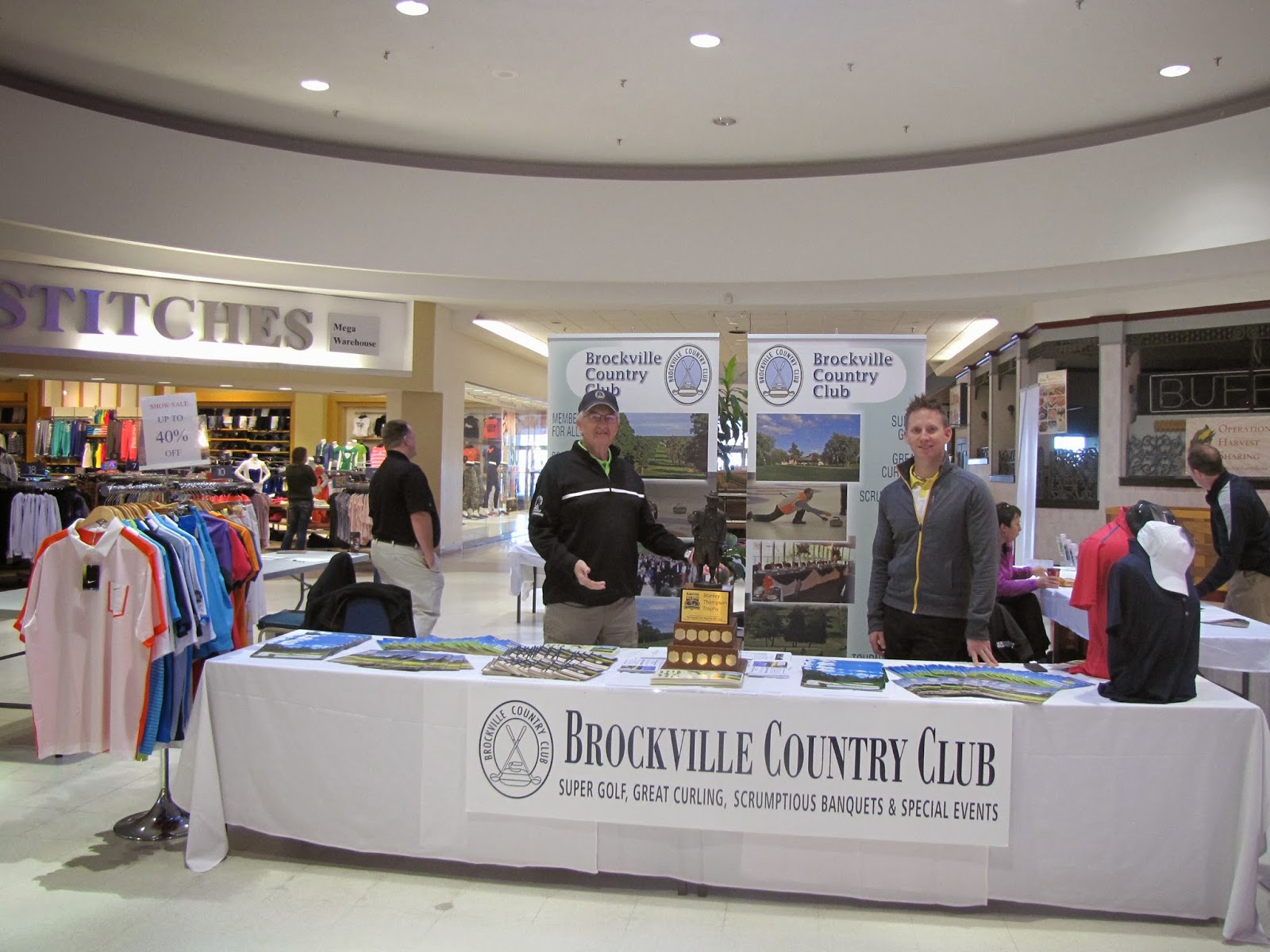 This was a good start and we received some very good membership leads as well as selling a little merchandise. Hopefully the mall will publicize the event next year and the Golf Show develops into a much larger event.
Posted by BCC at 6:34 AM No comments:

It takes years of dedication. Ray Bushfield, our BCC President, has been coaching a men's junior team for the past two years. Last year the team lost the Ontario Final and set their goal for 2014. 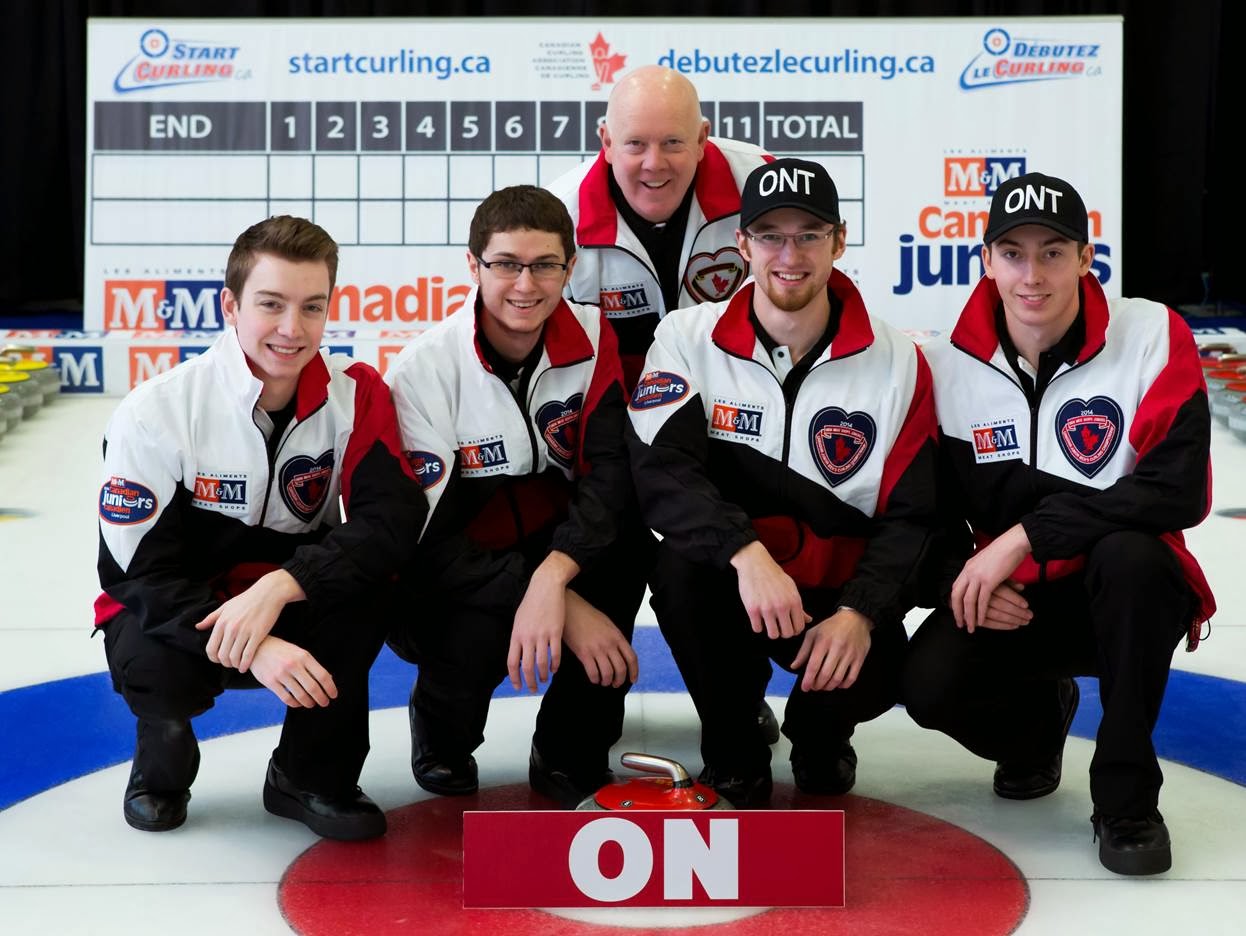 The junior rink consist of (L to R), Ryan McCrady, Doug Kee, Matt Haughn and Cole Lyon-Hatcher. Ray can be seen at the back. All four players attend university and college in Ottawa. To win Ontario, the curlers had to win their zone competition in early November in Manotick. This enabled the team to compete in the regional playdowns at the Royal Kingston in late November. That win enabled the team to attend the Ontario Provincial Championships in Gananoque January 2 - 6, 2014. They won the round robin which placed them in the championship game ... which they won. So one goal met!
Ten days later Ray and his team headed to Liverpool, Nova Scotia for the M&M Canadian Junior National Championships. The 11 day event consisted of 14 junior men's teams and 14 junior women's teams representing each province and territory including Northern Ontario. The rink of Ryan, Doug, Matt and Cole advanced to the championship round but came up one win short of making the final three playoff round.
CONGRATULATIONS Ray to you and your junior team for such a great showing representing Ontario.
Posted by BCC at 9:04 AM No comments: